At the heart of the Ruaha landscape is Ruaha National Park, which at 20,226km2 is the largest National Park in East Africa and the second largest in Africa. The greater Ruaha landscape also includes multiple Game Reserves, as well as Wildlife Management Areas and village land. Together, this forms an unfenced area of around 50,000km2, making it one of the most important wildlife areas left in Africa. 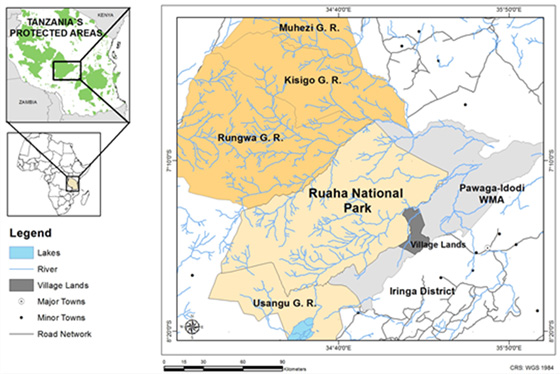 Ruaha is at the intersection of the Eastern African and Southern African eco-regions, giving it an amazing diversity of wildlife: for example, it is one of very few Parks where you can see both greater and lesser kudu. It also supports over 570 bird species, including some endemic species such as the hornbill. The area is one of outstanding biodiversity and species endemism, and is situated within one of the World Wide Fund for Nature’s ‘Global 200’ ecoregions.

Some of the Ruaha landscape is village land, which lies adjacent to the unfenced Park and which forms important habitat for large carnivores, especially in the wet season. This landscape is an important one for pastoralists, as it forms a movement corridor linking this pastoralist rangeland with those to the north-east, north-west and south-west. The dominant ethnic group in the region is the Hehe, who are traditionally agriculturalists, but various pastoralist groups have moved into the area recent decades, including the Maasai, Sukuma and Barabaig. This gradual in-migration of different people, including farmers, agro-pastoralists and pastoralists, means that the study area now supports a varied mix of ethnic groups and lifestyles, with over 35 different ethnic groups in the area. The project works across multiple ethnic groups but particularly focuses upon traditional pastoralists such as the Maasai and Barabaig, as they are the most likely to be affected by human-carnivore conflict.