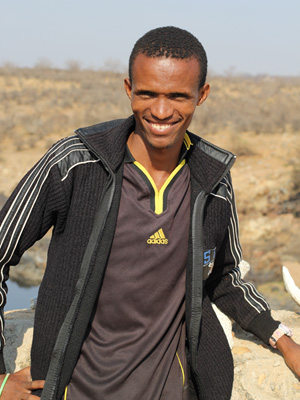 George Sedoyeka has been with RCP for over 4 years. He comes from a Barbaig pastoralist family.

‘I am third born in 8 children of my mother and 16 children of my father. I am coming from Mbeya region. I started standard 1 in 2002 at Isele primary school in Pawaga, Iringa district. My family moved to Isman when he moved his cattle when I was in Standard 2. I finished Standard 7 in 2008.’

George joined Form 1 secondary level in 2009 at the Highland Secondary School in Iringa town and completed Form 4 in 2012. ‘When I was in Standard 6 before secondary school my family moved to the Mbeya District and left me to complete my studies.’

When he completed form 4 he went back home to Mbeya and his friend called him to tell him about a conservation project that was looking for someone who could speak English. The project was looking for someone from the Barbaig tribe – to work with the RCP Lion Defender project (then the Lion Guardian project), so George went for an interview and met with Amy and Leila.

First, he volunteered for 1 month and then was given a short contract pending his results. He passed, and he was selected to go for advanced secondary school. Because he was so needed at the project – which was at its infancy stage – he postponed his education to concentrate on building the project with Amy and the rest of the small team.

‘When I was 12 years old when I was herding with my cousin, we were in Pawaga herding inside the park, because there was no grazing outside. One day when it was evening, coming back from grazing, a lion attacked our cattle. We had about 200 cattle with us, and we heard the cows screaming as if something was really wrong – so we went to check. All we had with us was our small spears (nkoki ndogos), but my cousin had a big spear because he was 20. So we ran towards the place and found a lion trying to kill a cow, he was holding the cow’s head about to bite it. My cousin tried to spear it, but missed. He took my small spear and hit the lion on its back, it roared and started running towards us – my cousins going Tii Tii to the lion telling him to go away There was nothing we could do for the cow because the lion had already broken the cows neck so my cousin told me to stand on the cow while he went to collect the other cows and take them back to the boma. In a few minutes, I saw a group of lions coming back with the lioness with two small cubs coming towards me. In only had my small spear with me, so I started throwing small stones. They kept coming at me, from behind, from the side, as the bushes where I was standing were very thick. I stayed there defending the cow for more than 20 minutes, while my cousin collected the rest of the cows and the other guys took the cows home. And then my cousin came to rescue me.

‘I was shaking… but my father had taught me how to fight lions. So I remembered his words – don’t run, don’t be afraid, don’t show fear, look into the lions eyes, show them that you’re not afraid of them.’

One year later at night lions came to our cattle in the boma. My father took a spear and found the lion trying to attack a bull, so he took his torch and his spear and chased the lion away. Luckily this time the cattle were only injured. So my father called the mamas and they stood on the door trying to push the cattle back into the boma as my father went out to chase the lions away’

At RCP I’ve been the Lion Defender Coordinator and act as research assistant to do interviews around the Ruaha landscape to monitor attitudes towards animals and the sightings around their bomas and where they are grazing their livestock.