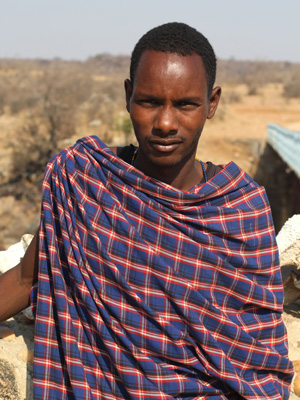 Gidawuri is his traditional name which means a powerful man. Daudi is from the Barbaig tribe and is a warrior. He has been working with RCP as a Lion Defender since 2013 and before he participated in many traditional lion hunts. He is good in traditional community meetings and he has influence amongst the warriors. Daudi has one wife and currently he is monitoring “Zone B –Lyangolo” which covers one part of Idodi village and Kitisi. This zone has a higher number of lions sighted and detected via spoor.

“For the first time when Dr. Amy visited us I was afraid to see a white woman coming to my boma. She said that she wanted to work with Barbaig to help the lions and it was my first time to hear that –How can I woman conserve the lions which were a big problem attacking our livestock and people? It was something I thought that it was impossible and I went far by thinking that she might had another hidden ambition behind the scene”.

“Later on I continue seeing her allocating the camp few kilometers to my place. The agenda was brought to the community meeting and raised many questions but through Stephano, the RCP/LD community liaison officer, he used his influence and skills to explain in deep and finally the elders agreed to accept the white women to be their neighbor but it was not that simple,” said Daudi.

“I really like my job despite of the challenges am facing from my fellow warriors especially when there is a retaliatory lion hunt although some of them do understand and support the project but when comes to the point that the lions had caused the problems then they forget all good things done by the project to them.”

“Through being Lion Defender I can’t mention all the benefits and skills I got for instance the free education to read and write Swahili, the use of devices like GPS and cellphones” added Daudi.