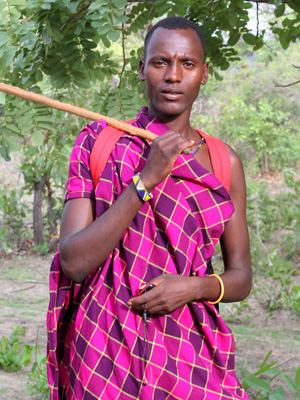 Bahati means “lucky” in Swahili, which is a fitting name for Bahati. He previously worked as a Lion Defender during the inception of the project, then left the position though he returned last year September 2016. He is working in “Zone C –Lyangolo” covering Idodi on one side and Mwira on the other side, Bahati is married with one wife. Before being an LD he used to hunt lions, elephants and buffalos. He led many hunts from which he managed to kill several while wounding many as well.

“I never believed that pastoralist and carnivores would one day coexist together; that was impossible before RCP. But since then they taught us many things about conservation and introduced the community benefits which goes together with the presence of the wildlife in our villages. They introduced wire bomas, Lion Defenders programme, Anatolian shepherd dogs, all of which were aimed at reducing the conflict between pastoralists and carnivores.”

Bahati added that previously he believed that in order for a man to really become a warrior and get respect from our community he must spear or kill lion. “That is why I did the same but later I found that it was something which is outdated and we should abandon that behaviour although it was not a simple decision to make as we normally listen our elders and not just anybody, that is why the elders were the one who passed the by law that whoever found leading or organizing traditional lion hunts; he must suffer consequences. He must get punished by slaughtering his cow and from that point I realized that it was a good chance for me to join and support the elders. That is why I joined the project and became an “anti-lion hunter” and I can say at least nowadays there is a decrease in the traditional lion hunts if we look on statistics compared to the time before RCP.”

“I am looking forward to see the generation of the Barbaig society of which there will be no traditional lion hunt if RCP continues”.