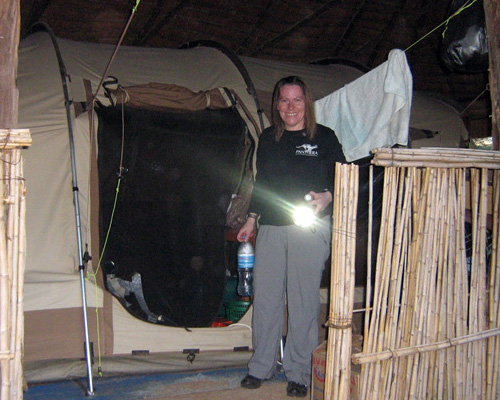 The founder of the Ruaha Carnivore Project, Amy Dickman, did her MSc and PhD work in the Ruaha landscape, investigating the extent and drivers of human-carnivore conflict in this area. That work revealed very high levels of negativity towards carnivores, but people said that they rarely killed large carnivores. Amy received a 5-year Fellowship from Oxford University in 2009, with the aim of establishing an internationally significant conservation project. She decided to keep working in Ruaha, and established the Ruaha Carnivore project that year and took on the challenge of the Ruaha landscape in Tanzania, a vast understudied landscape where a 10th of the world’s wild African lions occur, and an important wilderness where cheetah and wild dogs occur in significant numbers.

Dr Amy Dickman isn’t a particularly tall person, and as a short people she wouldn’t stand out in a crowd, but because her passion for Carnivores and the people of Africa shines through so brightly, she becomes a beacon of hope for those around her and naturally leads them forward to a place of better understand the conflict between people and carnivores.  She is practical and clever and has a good belly laugh.

By living full-time on village land in Ruaha, it emerged that the levels of both human-carnivore conflict and carnivore killing were extremely high, with the highest documented rate of lion killing in East Africa in current times. The conflict was driven mainly by people feeling marginalized and disempowered by living alongside wildlife, which imposed high costs on them and generated very few or no benefits. The mission statement of the Ruaha Carnivore Project is ‘To achieve successful human-carnivore coexistence by empowering local communities, and to develop effective strategies for long-term carnivore conservation’. Specifically, it aims to reduce the costs and improve the benefits associated with wildlife, particularly carnivores, on village land, and directly engage and empower local people in conservation.

To gain the confidence of the villagers she needed to understand their issues, and many times can be seen sitting under a tree deep in conversation with the elders… She can also be seen on National Geographic platforms grappling with the best conservation minds debating issues like the pros and cons of hunting lions.  She sees both sides of the coin, and despite being a committed vegan, is wise enough to understand that hunting contributes towards conservation.  She is brave enough to stand up for unpopular views, if, in her considered opinion – as a person who has lived cheek by jowl with the issues of wildlife-people conflict for nearly 2 decades – the actions result in conservation of healthy wildlife populations and the maintaining of land designated for wildlife.  Amy lives a dual life – she is a wife, a mother of a 2-year old, a team leader who roughs it in the bush alongside her team of 60 local Tanzanians, many of them ex-lion hunters – and a Fellow at the Oxford University where she supervises students inspiring them to engage in projects that make a real difference to conservation of endangered species and habitats.

What keeps Amy engaged in the Ruaha landscape? ‘I think it’s because of the huge value of wildlife, especially in a world with diminishing populations of wildlife, where Ruaha has populations likely to live long term. You look at places like Ruaha and realize what a resource it can be to the international community who like wildlife, and to the people who live here.  It would be such a pity to lose this resource.  If we can develop a successful model here in Ruaha – which is a microcosm of the problems that other landscapes also face – like growing human populations, conflict, poverty, trophy hunting – if we can develop solutions it gives us hope for that we can share our model with other places and with people who are facing similar problems.

Her vision will be one of the defining factors in the way that the vast Ruaha landscape, and other areas beyond, are managed in Tanzania.  With her academic background, she is working with researchers in her team to provide solid scientific research that is being used by government to make informed decisions towards sustainable and well-managed wilderness area, and to protect wildlife.

One of Amy’s greatest achievements is to educate the children of the villagers who live in proximity to the Ruaha National Park.  These impoverished communities have previously had little recourse to consistent education, with the Simba Scholarships and the Kids4Cats initiatives these kids are able to complete their studies, and have a real shot at getting out of the cycle of poverty into which they are born.  Several of these students have joined the project and have gone on to study at Oxford University!

Amy has dug deep into solving social issues, working with the village elders to identify needs for the village, which include health- and veterinary care.  Amy’s premise has always been for the villagers to lead and the project to follow, to create a sustainable scenario where villagers are connected to conservation and benefit directly from it.

Two of the biggest issues which Amy and her team face are -firstly, the tradition that to become a man a lion needs to be faced and killed; the second is the very real issue of loss of livestock due to attacks by carnivores.  A deep- seated tradition, such as an initiation rite from boy- to manhood is not easily changed, but the development of the prestigious Lion Defenders positions in the villagers has set up a new dynamic, with new kudus to aspire to.  To protect the livestock she and her team have set up a programme where they bolster existing livestock enclosures and build new ones – which has dramatically reduced attacks.  The introduction of guarding dogs is also proving to be a major deterrent.  However, it is not plain sailing and traditional hunts and revenge killings continue – but Amy never gives up, and continues to live through the issues resolving them as they unfold.

Amidst a changing landscape, Amy and the team continue with the conservation work which needs to be undertaken to feed government with information to make informed decisions affecting the Ruaha landscape – and beyond.  Tanzania has much to lose if people like Amy are not in the picture – the IUCN Red List shows that Tanzania has the most diverse and rich wildlife heritage of any mainland country in Africa.

Amy has the final word: ‘At all costs this diversity must be maintained – the delicate balance of developing a self-sufficient nation which feeds itself, maintaining its rich environmental wealth, and appeasing political forces in Tanzania – many of which are not in the hands of the conservationists.’