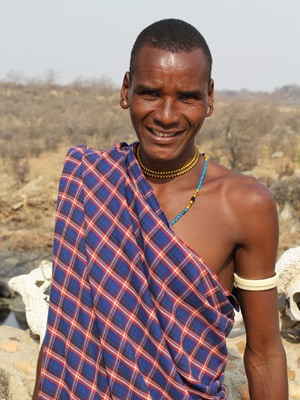 Alex’s traditional name is Gillexa, which is a traditional name. He was given this name because he was born when the community was mourning the death of one of the famous elders whose name is Gillexa, so in respect and honouring him they give his name to the new born child. Alex is 30 years old and he is married with one wife since April 2017, He started to work with RCP as a Lion Defender since 2013 and he is good in stopping lion hunts and community assistance, for instance finding lost livestock, finding lost herders, reinforcing bomas and attending the community meetings whereby all the agendas and bylaws are discussed and reviewed.

Alex said that before he made a decision to join the RCP as a Lion Defender program he used to hunt and lead many traditional lion hunts as he killed one lion and elephant, while leaving more than 24 elephants with injuries.

“I had a very difficult time when I made a decision to became a conservationist as it was something I never dreamed before.” He told his family about the decision he made but they were upset and refused straight away to agree and let him join the project. But Alex said that the community meetings which were conducted by the project via our community liason officer, Stephano, were very helpful as the elders and the warriors started to understand the importance of conservation and the goals of the project.

“For my community the work of Lion Defenders at first was seen as the work of poor people who they even isolated and rejected but as days went on the community supported us after they realized that we were very helpful for instance reinforcing the weak bomas, finding the lost livestock and help the herders by alerting them whenever we find the lion spoors or any signs”. Alex also mentioned the community benefits also help the community to understand and accept RCP’s work.

I wish the project could expand and reach all those in the Barbaig tribe in Tanzania so as they could recognize and value the lions and other wildlife.